The Baltic Methodist Theological Seminary began as a dream of the United Methodist Church in what was then Soviet occupied Estonia to provide evangelical theological training for church leaders. 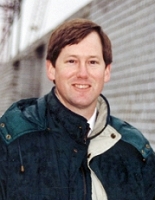 During the fifty years after World War II during which Estonia was forcibly occupied by the Soviet Union, formal theological or pastoral training was prohibited by the communist regime. It was only with the fall of communism in Europe, that Estonia regained her independance and dreams could become reality.

Three years after regaining freedom from the Soviet regime, the United Methodist Church in Estonia founded the BMTS and classes began in August, 1994 with 54 students. The first president was Andrus Norak , the former pastor of the Methodist congregation in Estonia's second city of Tartu, who had completed a Master of Divinity degree at Asbury Theological Seminary in the USA that same year. Instrumental in founding the BMTS was Dr. Wes Griffin who, together with his wife Joy, was sent from the United Methodist Church in the USA. Wes Griffin served as Academic Dean from 1994 until they returned to the US in December 1995.

By the time the first classes were offered, the BMTS had developed its constitution and curriculum to offer a 4 year higher education program in theology, with a one year course in practical theology as the foundation. Dr. Chuck Killian, professor at Asbury Theological Seminary spent the entire first semester at the BMTS. The original faculty also included Estonians Kersti Raudsepp and Margit Sepp, who had completed Master's degrees at Tyndale Theological Seminary in the Netherlands.

With curriculum, leadership and faculty in place, the first classes were offered at the United Methodist Church camp at Aa in August 1994. In September, regular classes began in Tallinn at the Methodist office building on Apteegi Street in Tallinn's old city. 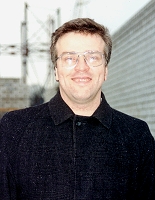 The facilities in Apteegi Street were extremely cramped. The single classroom was full from the start. Students sat on simple chairs, and took notes with their books on their knees. The dining area did not have sufficient seats, and so for lunch or coffee students were sitting on the stairs and in the window sills. The library was in a broom closet. Open the door and there was the librarian at her desk, with a few books on a shelf. Most of the books were in boxes in the basement. The office for the President, Dean, secretary and all the faculty was a partitioned area approximately 1.5metres (5 feet) wide by 4 meters (12 feet) long.

Students and faculty were literally rubbing shoulders all day, a closeness that created a very warm atmosphere. As well, the excitement generated by the newness of theological study made the Seminary tingle with excitement. Many of the first students were mature Christians and self taught pastors who had dreamt of freedom during long years of communist occupation and of the chance to study and practice their faith free from oppression and persecution. 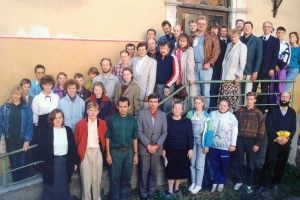 From the very first year the BMTS has been open to students from all Christian denominations. Over the years we have had many Lutheran, Baptist, Pentecostal and other protestant students, as well as a smaller number of Orthodox and Catholics studying with us. While Methodists have always remained the largest group within the student body, one of the strengths of the BMTS has been the ecumenical atmosphere as students from different churches interact with each other.

Also from the beginning, the BMTS has been multilingual and international. Approximately 1/3rd of the student body study in Russian, thanks to simultaneous translation equipment donated by Asbury United Methodist Church in Tulsa, Oklahoma. With this equipment, Estonian and Russian speaking students are able to participate in the same classes, interact and learn about and from each other. As Estonia continues to struggle with the affects of the Soviet policy which moved large numbers of ethnic Russians into occupied countries, the BMTS offers a unique opportunity for integration.

While the majority of Russian speaking students at the BMTS are from Estonia, a significant number also come from Russia and Ukraine, as well as from Latvia and Lithuania, making the BMTS a school that serves not just Estonia, but the entire region.

The first graduates of the BMTS received their diplomas in June 1998, in a ceremony held in the partially completed Baltic Mission Center which several years later would become the BMTS' new home.

In 1998, under the direction of then Academic Dean Kersti Raudsepp, the BMTS was granted accreditation by the Estonian state as a private practical college. We remain one of five accredited schools in Estonia offering a recognized degree in theology. Later that same year, Lii Lilleoja took over the role of Academic Dean.

In January 2000, after more than five years in Apteegi Street, the BMTS moved into the new facility of the Baltic Mission Center. With ample classroom, library, cafeteria and even dormitory space, the new building gave the BMTS room to develop its potential.

In fall 2000 the BMTS launched a Distance Study option, where students would travel to the Seminary three times per year for two week study sessions, completing approximately half of their studies in the classroom and half by extension. Distance Study, which allows students to work full time while pursuing their studies, quickly became more popular than the traditional full time mode of studies.

English became a language of instruction in 2002 with Latvian students using the BMTS' simultaneous translation equipment and professional translators to take the Estonian lectures into English. The addition of English as a language of instruction made the BMTS even more international. Soon the Latvian students were joined by students from Lithuania, Finland and even Brazil studying theology in Estonia in English.

Also in 2002 the BMTS organized its first summer mission team to work with small ethnic groups inside of Russia in co-operation with the Swedish mission organization Light for the Peoples. Three teams went out in the first year, to the Komi, Mari and Burjat people. The students returned however, saying that this could not simply remain as a Seminary training exercise to broaden students' horizons. "We have got to get the churches involved" was the rallying cry. Led by BMTS faculty, students and graduates, the summer mission program soon grew into the Evangelism and Missions Workgroup under the umbrella of the Estonian Evangelical Alliance, with a mission to get all Estonian churches involved in mission to the indigenous Finno-Ugric ethnic groups inside of Russia. The movement however, soon became two directional, as Finno-Ugric Christians began coming to the BMTS to study. In 2009, Nadezhda Popova became the first Komi to graduate from the BMTS, an event that was especially significant as Nadezhda was the daughter of Komi pastor Vassili Popov who received significant help and encouragement from Estonian Christians during Soviet times as he labored to produce the first ever Bible translation in the Komi language. Since then, more Christians from the Finno-Ugric Komi, Khanty and Udmurt peoples have come to the BMTS to provide them with the training necessary to become Christian leaders among their own peoples, making the BMTS an important center for foreign mission in Estonia.

In 2006 the BMTS added a Modular Study option. This new mode of study allows students who work full time and who live close to Tallinn to participate in monthly three day study sessions in order to complete their theological training. Modular studies quickly became the most popular mode of studies for students living inside Estonia, while Distance Studies continues to meet the needs of the international students.

2007 saw the departure of BMTS president Andrus Norak. Academic Dean Lii Lilleoja took on the added responsibility of Interim President until Meeli Tankler was installed as the new president in 2009.

God has continued to bless the work of the BMTS, and today 97 students, from 5 different countries, and 8 different denominations are preparing for dynamic ministry in the Kingdom of God.

The leadership and faculty of the BMTS, together with all our friends and supporters, are truly humbled by what God has done, and is continuing to do through our students. To date, 60% of our graduates are in full time ministry across Estonia, Latvia, Lithuania and Russia, and an additional 30% are actively involved in part time or volunteer work for the cause of Christ! Our graduates serve as pastors, teachers of religion, church planters, evangelists, youth workers, social workers, prison chaplains, military chaplains, Bible translators, etc. God is doing great things! Lives are being changed! This part of the world will never be the same!